Like a lot of people in Paul’s position there are very few photographs with  him at his height of weight gain.  His story is very simple; he worked for a  courier service that we used to deliver our parcels.  We would often chat  about weight, issues, diet, exercise etc, as Paul had always struggled with  his size. 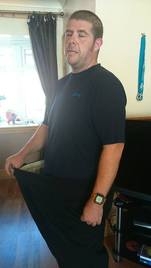 After a little coaxing, I convinced him that whilst his journey would have  many highs and lows, a significant weight loss was achievable as long as he  was consistent.  At over 20 stone this was not a quick fix, but after an  amazing amount of commitment from paul and the right guidance from  us.    Paul in 12 months has dropped over 7 stone, entered, ran and  finished the  2014 London marathon and raised around £2,000  for www.caudwellchildren.com.

Paul has now got the fitness bug and has entered and plans to compete in  his first ever Triathlon in 2015, obviously once he has leaned to swim.